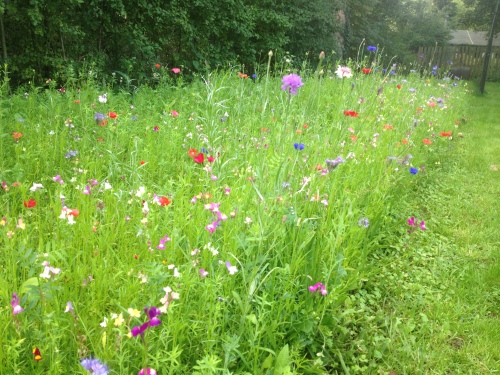 It might be slightly late in the year for an annual meadow review, but while the sky is grey and the leaves are coming down by the boat load it’s nice to be reminded of the colour that already seems a lifetime ago..

Back in April I decided to sow a stretch of annual meadow using a Pictorial Meadows seed mix. I’ve wanted to do this since arriving at the garden years ago, however the task never made it to the top of my things-to-do list quickly enough in Spring each year and so the opportunity was always missed. The length of ground I chose was roughly 16m x 2m and of the fairly free-draining, light soil indicative of this area of South West London.

Pictorial Meadows have built a reputation on providing high quality meadow seed and key advice services in a fairly new field of horticulture. Founded by leading naturalist garden designer and professor at Sheffield University, Nigel Dunnett, their client and project list is now extensive, including the stunning meadows commissioned for the London 2012 Olympic Park.

I chose a seed mix that would maximise colour and impact while providing a food source for insects in a fairly quiet and otherwise infrequently visited area of the garden. The mix was listed on the Pictorial Meadows website (www.pictorialmeadows.co.uk) as ‘Standard Annual’, which includes poppy, cornflower, toadflax, Atriplex and Coreopsis flowers.

The first step was to remove the top layer of grass and weed. As the garden houses probably the largest population of Alkanet residents I have ever encountered, there was some additional deep-root digging required in order to prepare the ground for rotorvation. Once rotorvated, I then trampled the soil and raked over.

The seed was then mixed with sand; this enables both a more even distribution when sowing, and a visible contrast with un-sown ground so as to indicate where you have scattered seed. I sowed my meadow in early June, which was far later than intended and consequently the strip only began to reach decent flowering around mid September. The ideal would be to sow around mid April, which I will be doing next year for certain. Regardless, however, the results were fantastic; nothing beats the sight of an annual meadow in sunshine. It draws you in and the colours absorb you to distraction. I think we must have some innate, deep-set connection with the cornflower meadow, perhaps reaching back to the cornfields of our ancestry.  To stand and watch it seems to chime with something within; I would highly recommend having a go, even if you only have space for a meter or two.